Mick Cooper is a Club volunteer and former Knebworth player, and was a long-standing committee member of the Herts Senior County League. An avid football fan, he has visited 500+ grounds. 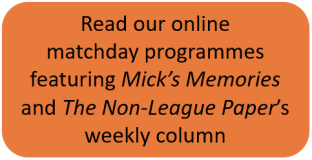 Mick is back on the pitch and gets a big call up, plus a trip to Wembley… read here

We’re looking for someone to put together a quarterly newsletter for our members and sponsors. For more information DM us 🧡⚽️
A bit behind on some of @knebfc social updates but whether we win, lose or draw, individual performance is always recognised. A poor result 2 weeks ago but an MOM performance nonetheless from @jimmy_agnew #orangearmy #keepitorange
First win of the season on sat for the @knebfc reserves, 5-1 away to Hinton Reserves - huge well done to the players and coaches! Goals from Aaron ⚽️⚽️⚽️ Alex ⚽️ Mark ⚽️ with the @extra.staff MOM going to Aaron Doherty 🧡⚽️ #startofsomething